A warm and muggy Thursday night saw the start of the Summer Football Festival, with the Roar hosting the Glory on a pitch that somewhat resembled a cow paddock.

Brisbane managed to take control for most of the game, back to their former best with some quick breaks that were matched sporadically by smart Glory play.

Heading into this one, the head to head record was not pretty reading for the visitors, taking just four wins from 18. Thursday night saw the return of so many of those players essential to the smooth running of their respective sides.

The game turned on its head 15 minutes from the end, with the Glory taking the game by the neck, scoring the leveller through Andy Keogh, and the sealer through Spaniard Diego Castro. Fox Sports revealed that Brisbane Roar have sought the insights of medical professionals to get to the bottom of why so many injuries have been suffered by their players in recent times.

Showed his brave goalkeeping traits many times, managing to defend the Roar goal, for the most part.

Took far too long to play in his teammates in open spaces, and failed to pounce on opportunities to get forward. Somewhat strong defensive showing nonetheless.

Has showed his adaptability, with some solid defensive displays in the last few weeks, and tonight was no different.

Back for his first senior game since October. Forced off through injury late on, yet a typical solid game.

Some positive attacking runs and crosses lacked the quality they needed to find his teammates in the box. 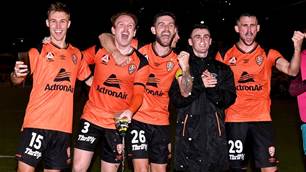