The Brisbane Times is reporting that the council are suing Brisbane over more than $ 150,000 in unpaid bills, amounting to over a year of utility costs, for their training ground at Heritage Park.

The unpaid bills were allegedly racked up between October 1, 2018 and December 31, 2019, but Brisbane strongly disputed the claims, saying new councillors had forgotten about a previous deal the club struck with the council.

"Brisbane Roar FC strongly disputes charges brought against the club by Logan City Council, which primarily relate to water usage at the Logan Metro Sports Park complex at Heritage Park," the club said in a statement after questions from the Times.

"A deal that was agreed upon in 2015 by Brisbane Roar and Logan City Council was that sponsorship benefits provided by the club to the council were to off-set the provision of facilities.

"Following the appointment of a new council in 2019, it appears this deal has been lost on its new councillors."

The club have also been involved in a stoush against the Queensland state government, with coach Warren Moon slamming the 'one rule for us, one rule for the AFL, NRL' after the club's players were denied an exemption and forced into hotel quarantine. 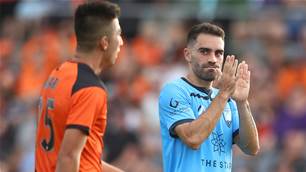 A snapshot of the A-League's 11th week