Melbourne Victory have started their title defence with back to back home defeats as Tony Popovic enjoyed his first win with Perth Glory after an enthralling 3-2 victory at AAMI Park.

Looking to put last week's controversial derby defeat behind them, the Victory endured a horror start as they found themselves two goals down inside 23 minutes.

First it was Joel Chianese on hand to put the visitors ahead from close range after just eight minutes, before poor defensive awareness again allowed Andy Keogh to nip in and double the lead.

Trailing 2-0 at halftime, Kevin Muscat must have had some choice words for his chargers and it paid instant dividends as Terry Antonis halved the deficit after just 104 seconds of the second period. 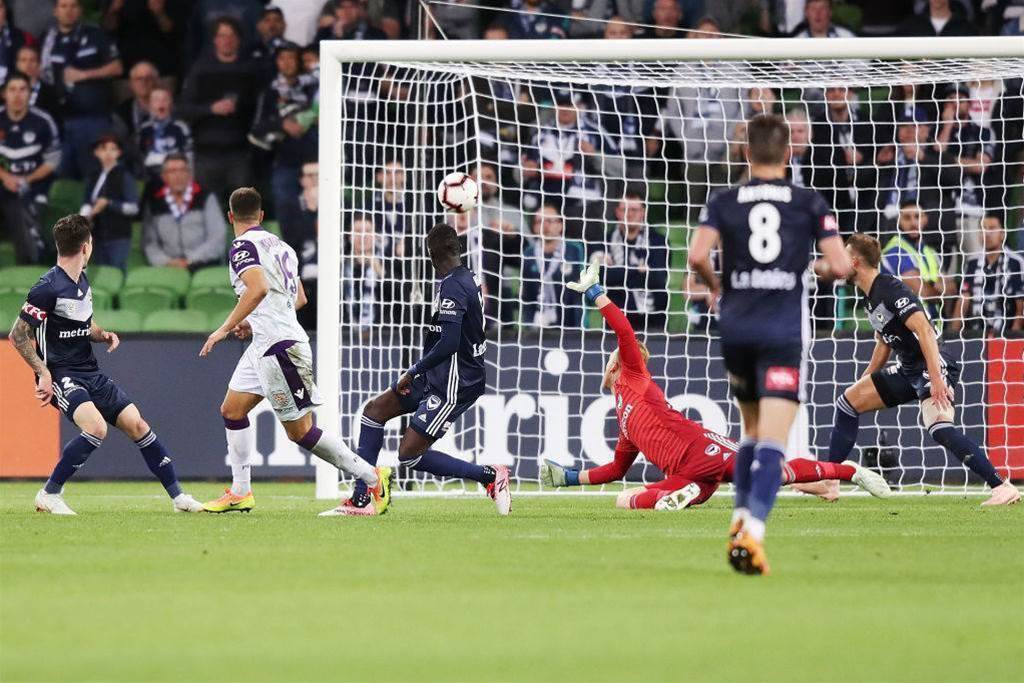 After being found in space by marquee man Keisuke Honda, Antonis turned and arrowed his strike into the bottom corner from 20 yards.

The Victory looked a completely different outfit in the second half and after Reddy had denied both Honda and Barbarouses, it was the Japanese maestro again who provided the equaliser.

Storm Roux rose unchallenged at the near post to guide home Honda's corner and level the scores with just 3 minutes remaining in regulation time and send the vocal home crowd into raptures.

Only one side looked likely to emerge as the victor as Victory continued to surged forward, but there was one final twist in the tale as Perth countered in the 3rd minute of injury time and claimed all three points.

Joel Chianese found space in behind on the break, and although his shot was saved by the legs of Lawrence Thomas, there was nothing the Melbourne keeper could do as Chris Ikonomidis swept home the rebound to score his first goal for his new club as Glory claimed their first victory at AAMI Park since March 2013.

Thomas could do nothing about the opening two goals and his sloppy first touch earned him a yellow card as Victory were rattled inside the opening half an hour. Had little to do in the second period and was unlucky to see Ikonomidis slot home the winner after saving Chianese's shot with his legs.

His link up play with Honda on the right side was impressive and he capitalised on some poor defending to equalise for the hosts.

Equally at fault for Perth's second goal as he still appears to be struggling with the pace and intensity of the A-League. Left the field with 15 minutes remaining after an ugly collision with Reddy.

Was strong going forward once again but was caught out of position as Perth countered to steal all three points.

A difficult evening for the Spaniard as he struggled to impose himself against Perth's defensive mindset. Helped steer the side back in the right direction but still looks to be finding his feet in his new surroundings.